Cycle Mindfulness: What Happens When You Teach Fertility Awareness to Teen Girls 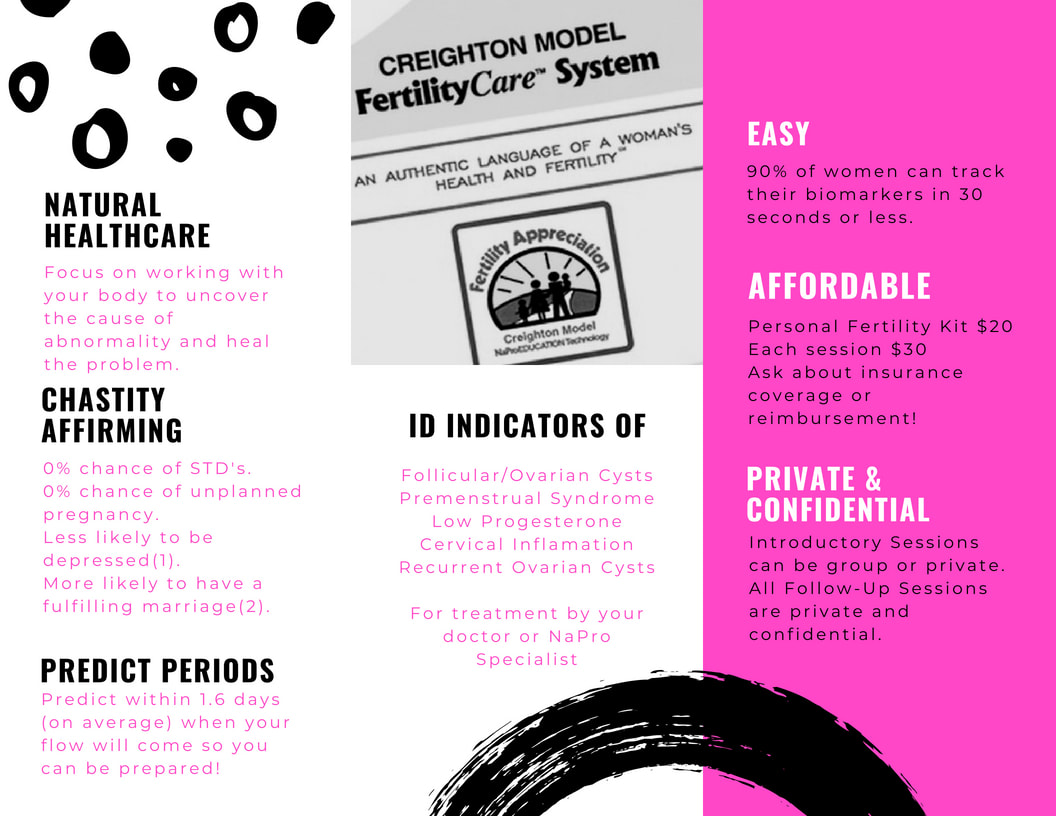 5 Things They Don't Teach You in Sex Ed is for teens, tweens and parents to introduce fertility, reproductive anatomy and educate on the benefits of abstinence.  ​The second hour is a FertilityCare Introductory Session.

"I think a lot of girls at my school would have more respect for themselves if they heard this talk." 16-year old female

"I wish I could have learned this in high school, but I'm so happy to have learned it today!" 19-year old female

"Very informative, good for very early teen to older teens.  This would be a good program to provide after Theology of the Body in churches."  RN/Mom who came with 11, 16 and 19-year old daughters.

I chose this topic because I hope to witness the beauty of chastity to adolescents, especially those without religious reasons to commit to chastity.  Enjoy!
Stephanie Hamilton
Theresa Schortgen
EPII Advanced Research Paper
1 September 2018

​                “Chastity—the most unnatural of all the sexual perversions,” Aldous Huxley prophetically stated in his 1936 novel Eyeless in Gaza.  Although many in the post-modern era agree with Huxley, scientific research repeatedly portrays the benefits of chastity—including the physical, emotional and relational benefits of saving genital contact for marriage.  Fr. Dan, author of “Fr. Dan’s Top 10 Dating Tips,” accurately portrays falling in love when he says “Everyone who has fallen in love is tempted to think that his or her relationship is so deep, special, unique, perfect, meant-to-be, and unbreakable that it is an exception to the cosmic moral order and is mysteriously protected from disaster:  This is a FEELING NOT REALITY” (Fr. Dan).  Adolescent minds struggle with differentiating feelings from reality; therefore, the scientific benefits of waiting until marriage will have the most impact when presented as helping the adolescent to love themselves, love their significant other and love their future marriage.

The undeniable personal benefits of avoiding genital contact until marriage include 0% chance of unplanned pregnancy and 0% chance of Sexually Transmitted Infections (STIs).  Teenage pregnancy rates drastically increased after the introduction of birth control, resulting in 240,000 children born to girls 18 or younger in 2000 (Johnson, Et al.).  These mothers and children have an “extremely high probability of long-term poverty and Welfare dependence” (Johnson, et al.), according to The Heritage Foundation research project on sexually active teenagers.  Loving yourself as an adolescent female should include eliminating the fear of unplanned pregnancy and the probability of long-term poverty by avoiding genital contact.

Approximately 54,700 people contract an STI daily, causing about 65 women to become infertile each day in the United States (“Statistics”), compared to 1,153 people getting in car accidents daily due to texting while driving and eleven people dying each day from distracted driving (Ameen).  Although eleven people dying from texting daily is eleven people too many, 65 couples never able to have children because of lifestyle choices is incredibly higher.  If you love your body by not texting behind the wheel, why not love your body by waiting until marriage?

While some researchers suggest depressed teenagers self-medicate by sexual activity, Johnson and his colleagues interviewed Meg Meeker, Doctor of Adolescent Medicine, who stated, "Teenage sexual activity routinely leads to emotional turmoil and psychological distress…. [Sexual permissiveness leads] to empty relationships, to feelings of self-contempt and worthlessness. All, of course, precursors to depression” (Johnson, et al.).  From first-hand experience, Meeker describes the link between sexual promiscuity and depression as causal rather than solely correlational.  As Meeker suggests, adolescents can protect themselves from empty relationships, feelings of self-contempt and worthlessness and an increased risk of depression and suicide by avoiding sexual permissiveness.

Teenagers best love their significant other when they choose to wait until marriage for many of same reasons they love themselves by waiting.  If a child results from the genital contact, single parents owe an average of $5,774 per year in child support (Wolf).  If an adolescent expects child support to help raise the child, they should know that just 52.3% of custodial single mothers and only 31.4% of custodial single fathers received child support in 2013 (Wolf).  The average amount received in child support falls $700 short of the average cost of raising a child for a middle-income family (Gajanan).  This puts an incredible financial burden on the custodial parent, not to mention the immeasurable emotional and social burdens that result from single-handedly raising a child.  Although birth control can prevent pregnancy, the actual use effectiveness is only 91% for the birth control pill and 82% effective for the male condom (“Effective Birth Control”).  If a teen waits until marriage, they do not have to worry about paying child support or raising a child without the support of a spouse.

Loving the other person means putting the other person’s well-being above your own interests.  Many STIs are spread without symptoms and only 4 of the 8 common STIs have cures (“Sexually Transmitted Infections”).  Combined with the fact that more than 1 million STIs are acquired everyday worldwide, many genitally active teenagers give their significant other a disease during intercourse (Sexually Transmitted Infections).  Condoms, marketed to teens for “safer sex,” only prevent the transmission of HIV 80% of the time for heterosexual couples (Condom Use).  Many STIs increase the risk of HIV acquisition three-fold or more, result in over a 33% chance of adverse birth outcomes, and can cause cervical cancer and infertility (Sexually Transmitted Infections).  The likelihood of contracting an STI increases as the number of sexual partners over a person’s life increases.  Therefore, choosing to wait until marriage protects teens, their significant others and their future spouse from STIs.

By anecdotal evidence, most genitally active teenagers believe practicing for marriage helps determine if one will make a suitable partner, thus decreasing the likelihood of divorce.  Initially, this logic appears reasonable and advocates for living together and trying multiple sexual partners to discover the best compatibility before committing for life.  However, sociological research shows that reserving genital contact for marriage provides a mind-set that protects the couple against infidelity.  17% of divorces in the United States occur due to adultery, which 22% of men and 14% of women commit even though 90% of Americans believe adultery is wrong (Latest Infidelity Statistics).  Developing the “intercourse is for marriage” mindset prepares couples to avoid extra-marital relations.

Although evidence of greater personal and future marital health abounds, peer pressure, the culture at large, and the desire to love and receive love make chastity a difficult journey for many adolescents.  Therefore, love must permeate our every word and action as Practitioners.  When adolescents come to us already genitally active, our response must include compassion.  We must meet them and journey with them, challenging them at each follow-up to live courageously and virtuously, but exhibiting acceptance and encouragement when they relapse.  We should continue to journey with them as long as their willingness to strive towards a more virtuous life continues.  Should they begin scandalizing the program by marketing it as a means of contraception or as supporting their unchaste decisions, prudence would guide us towards dismissing them as clients.

Those who come into the program genitally active may wonder why we encourage chastity since they no longer have physical virginity.  Udai Yalda said it best in A Walk in the Rain, “Chastity is not an attribute of body, but of soul” (Yalda).”  The chaste mind sees genital contact as such a deep connection between persons that it belongs only within the covenant of marriage.  The covenantal mindset towards human sexuality protects the mind against infidelity.  The fortitude and will-power needed to avoid genital contact with the one you love, especially after previous genital contact, strengthens the mind and body to overcome extra-marital temptations.  The patience in waiting for marriage will serve a couple well at times in their marriage when genital contact is not welcome or possible, such as during business trips when 36% of people admit to having an affair (Infidelity).

Many clients may feel isolated in their efforts to live a virtuous life.  On her blog, Emily Wilson boasts of many friends who made the “impactful decision” to decide from this day forward they will wait for their husband or wife.  Elaborating, Emily points out that premarital intercourse oftentimes leads to insecurities, worry, guilt and regret; whereas married intercourse leads to deep joy, peace and the knowledge that “I am loved—all of me—exactly as I am (Wilson).”  When living out that decision, they can feel confident that the person they next have intercourse with will call them, will still be around in years to come, and will raise a child with them if pregnancy occurs because they have promised to do so in front of family members and friends.   Emily’s talks (YouTube and blog) will provide a sense of encouragement to those ready to live out chastity.

For a hilarious and practical man’s perspective, Jason Everett speaks to the heart of many adolescents searching for truth.  His talk, “How to Save Your Marriage… Before You Meet Your Spouse” (YouTube, Franciscan University of Steubenville, 18 Nov. 2017) and his book, If You Really Loved Me:  100 Questions on Dating, Relationships and Sexual Purity (Catholic Answers, 2009) challenge men to take leadership in the relationship and encourage women to expect respect from the men they date.  “You will not lift the veil over this body until you lift the veil over this face,” Everett proclaims to women in “How to Save Your Marriage…” His talk primarily focuses on warm-hearted and hilarious stories while his book contains more theology.  Therefore, I would primarily recommend his YouTube talk to the non-religious adolescent.

For those determined to return to chastity, or just willing to consider the possibility, I will first recommend Chris and Lisa Padgett’s book Not Ready for Marriage, Not Ready for Sex, One Couple’s Return to Chastity (Servant Books 2006) or their CD by the same title (Lighthouse Catholic Media).  Although they contain a faith-based undertone, the personal stories of a couple who deliberately struggled to return to chastity for two years before marriage will intrigue and encourage the adolescent.
​
Lastly, I would encourage couples to look forward to married intercourse.  Research shows that those married to a faithful partner report the highest levels of physical and emotional sexual enjoyment.  Oftentimes, these couples describe their experience as “satisfied,” “loved,” “thrilled,” “wanted” and “taken care of” (Everett, pg 21).  Amazingly, Dr. Winnifred Cutler’s research shows that married couple’s bodies adapt to each other so that the man’s testosterone level reaches its highest point when the wife’s estrogen level peaks, creating a “hormonal symphony” (Everett, pg 21) that creates greater pleasure for the couple.  This only occurs in a monogamous and long-term relationship.  When we challenge the adolescent towards chastity, we must focus on how chastity fosters better relationships instead of turning couples off with a suppressive image of chastity. 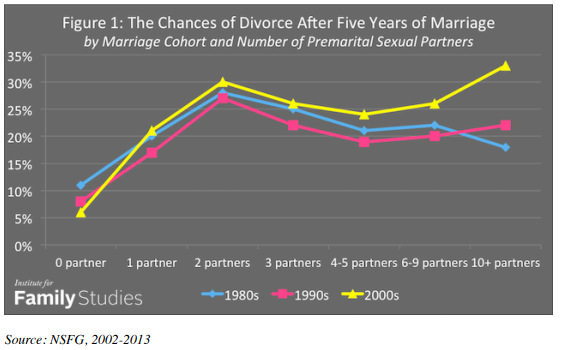